Gymnastics Champion Sets His Sights on the Olympics 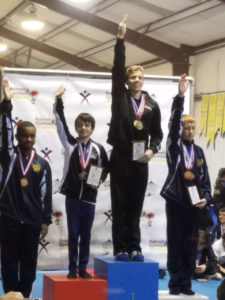 SC Whitmore School is proud to announce that junior Zachary English was recently named a state champion gymnast! Zachary was named the level 9 all-around state champion as well as champion on the rings, high bar, parallel bars and vault at the SC Men’s Gymnastics State Championships. In addition to this recent accomplishment, last season Zachary placed 14th in the nation in his age group. Later this month Zachary will be competing at the Regional Championships in Georgia.

The flexibility SCWS, a tuition-free public virtual charter school, provides its students allows them to dedicate substantial amounts of time and energy towards extra curricular activities such as athletics, the arts and academic clubs.

Zachary English says he chose SCWS due to its flexible virtual class schedule, which allows him to practice and compete at the highest levels of gymnastics. He practices gymnastics in the morning and late afternoon and completes his coursework during the afternoons and in the car between practices.

His next step is to attend college on a gymnastics scholarship. Ultimately Zachary hopes to compete at the highest level possible – the Olympics.

When he’s not competing in gymnastics, Zachary is a champion in the classroom.

“(Zachary) has made great progress in Computer Applications and has a high A average,” said Mrs. Carter, who teaches Computer Applications. “He responds graciously to feedback and is great about communicating his questions or concerns about the assignment. His ability to respond to written instructions is evident in his exceptional work quality.”

“Zachary is a great example of a SCWS student who is able to excel both inside and outside of the classroom, due to the flexibility our school offers.” said Principal John Loveday. “We are all pulling for Zachary as he continues to succeed in the world of competitive gymnastics.”

SCWS is a tuition-free, virtual charter public high school that was founded in 2011 and aims to engage students in mastery learning. The school’s objective for students is to become independent learners in a challenging way while giving them the essential tools for success that they may need. This unique environment of learning is an alternate form of education for students who may be on an accelerated track or need a flexible academic calendar.